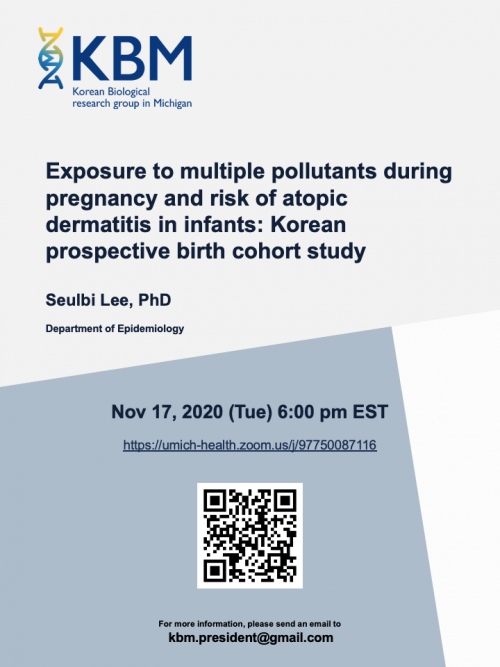 Prenatal exposure to various environmental pollutants has been associated with increased risk of infantile atopic dermatitis (AD). However, a few studies have examined the combined effects of multiple pollutants on AD. We clarified the effect of multi-pollutant exposures during pregnancy on risk of AD in 6-month-old infants using data from the Mothers and Children’s Environmental Health (MOCEH), a prospective birth cohort study. We examined 738 mother-child pairs for which both the exposure and information of AD were available. Total 10 pollutants were repeatedly measured at early and late pregnancy. Concentrations of three heavy metals -mercury (Hg), lead (Pb), and cadmium (Cd)- were measured in maternal blood samples. Concentrations of bisphenol A (BPA) and three phthalate metabolites -mono(2-ethyl-5-hydroxyhexyl) phthalate (MEHHP), mono(2-ethyl-5-oxohexyl) phthalate (MEOHP), and mono-n-butyl phthalate (MnBP)- were measured in maternal urine samples. In addition, daily exposures to nitrogen dioxide (NO2) and ambient particulate matter (PM10 and PM2.5) were estimated based on residence address and averaged over gestational age. Information on infantile AD was obtained by using a questionnaire administered to the guardians of the infants under study. To assess the effects of multiple pollutants, we applied three statistical methodologies. First, Elastic-net regression model was used for individual effect of pollutants. Second, Partial Least Square Regression model was used for the overall effect of each pollutant group. Finally, Bayesian Kernel Machine Regression model was used for the overall joint effect of all pollutants. We found that the overall joint effects of multiple pollutants in late pregnancy were associated with an increased risk of AD in 6-month old infants. Our study suggests that exposure to various pollutants during pregnancy can have significant combined effects on infantile AD, even when each pollutant level is below the concentration that causes observable effects. Further studies are needed to confirm the synergistic effect of these exposures during pregnancy on AD in children.